Who Is Cowtown Pattie?

Cowtown Pattie
I was Lillie Langtry in another life, and might have a crush on Calamity Jane.

I hinted yesterday to my old Bloggy friend,WhiskyPrajer, that I would attempt a blogpost.

I am in a strange-to-me place in life at the current time of 16:12 on October 11th: recently retired and living on cornbread, beans, and fried potatoes while coming to grips with a 68 year-old body that was chained to a desk gangplank most of her life. I suddenly understand the colloquialism "hair shirt" more personally. I once felt at ease at this blogging game, but now...it's like trying to type on a rusty old manual Underwood that's lived for decades in an abandoned beach shack, said "hair shirt" a constant irritation.

Finally sitting at my bedroom desk last evening, trying to remember the html tricks I once memorized and executed effortlessly, the damned keyboard remained silent. It was uncomfortable and I gave up in both sadness and frustration; sighing heavily I headed downstairs to our lovely deck with my Alexa speaker and a bottle of cheap Rioja. (My oft-summoned muse in the form of Hemingway approved the motion.) 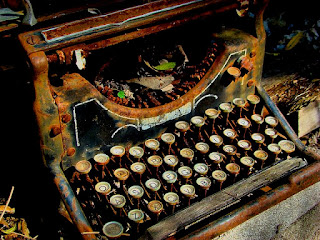 A few weeks ago while searching for the early bloggers I once communicated with almost daily, I gave thought to some wonderful voices now silent except for their ghostly postings still online (for which I am grateful):

Maybe I will reconnect and find my old voice; more likely it will be a NEW old voice -vintage with some Bitters of Experience, heavy on the bite.

Canary In the Coal Mines 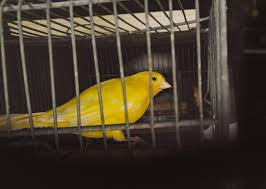 The world's bird population is dying. One out of eight bird species worldwide is threatened with extinction, a 40% upward tick since 1988.  Biodiversity disaster is very real. The way humans run economies and their daily lives are the prime threat, but the most recent study by the National Audubon Society predicts:

"If Earth continues to warm according to current trends—rising 3 degrees Celsius (5.4 degrees Fahrenheit) by 2100—more than two-thirds of North America’s bird species will be vulnerable to extinction due to range loss. (A March 2019 study, suggests that drastic and immediate action will be necessary to slow warming to just 2 degrees by 2100.)"

Just as canaries were sacrificed to detect deadly underground gases during coal mining operations, birds are "sentinel species".    Can you imagine a world without the wonderful Minnesota common loon? The mountain bluebird in Idaho?  I could list a dozen more.  What if one day in the very near future, your children and your grandchildren will only be able to hear these birds' beautiful songs through a digital file played on an electronic device?  Our entire natural soundscape could go silent.

is changing 20 times faster today than it has during any period during the past two million years. However, if humans could slow the rise of global temperatures to 1.5 degrees Celsius (2.7 degrees Fahrenheit), it would reduce vulnerability for 76 percent of North American bird species.

Our noisy world also is a form of pollution that affects our bird population. This article in National Geographic, authored by Carrie Arnold is a fascinating yet worrisome read:

"
The research, published today in Science, is among the first to scientifically evaluate the effects of the pandemic on urban wildlife. It also adds to a burgeoning field of research into how the barrage of human-made noise has disrupted nature, from ships drowning out whale songs to automobile traffic jamming bat sonar."

The biggest things you can do as an individual?  Stop letting domestic cats outside unattended. Fluffy needs a caged area in the grass that restricts his ability to hunt and kill.


"Predation by domestic cats is the number-one direct, human-caused threat to birds in the United States and Canada. In the United States alone, outdoor cats kill approximately 2.4 billion birds every year. Although this number may seem unbelievable, it represents the combined impact of tens of millions of outdoor cats." - American Bird Conservancy

Plant more native shrubs, flowers and trees. Buy older homes instead of the next shiny new one built on small plots in the suburbs.   And MOST of all, vote for candidates who support a green agenda with actions that count.

The Time That's Right For Reaping by Sanguine Woods

The Time That's Right For Reaping

He Was a Cowboy.


As I step on board I’ll be leaving
All my sorrows and heartaches behind
I’ll be safe with Jesus the captain
Sailing out on the ole ship of Zion.

***This was a post a few years ago. I promise new postings soon, but for now, I love to revisit some of my older writings.
Late in the evening, when the bullfrogs begin their mesmerising singsong lullabies to the sleepy waning sun, the Colorado River flows like liquid emeralds through the Texas hill country. During heavy spring rains, the Colorado becomes a roiling fierceness of wrathful anger; on a hot still summer day, its cool shaded mossy banks are heaven on earth.

My mother's family farmed the river delta area near San Saba; wind-swept little towns marked now by old weed-choked cemeteries and sleeping dogs in the middle of the road. Standing on the Regency Bridge near Locker, I close my eyes and can almost hear a small Baptist congregation singing that ancient hymn Old Ship of Zion; waded full thigh-deep in the old river, their white cotton choir robes spreading out like giant water lily petals in the cold green water.

My great Uncle Vernon was baptized in the Colorado on a warm spring Texas day, as were many of his kin before him. I only know this because of a late cousin's memoirs. He was not a man to wear his religion on the outside; introspective and quiet, Uncle Vernon was a real cowboy and a true country gentleman. 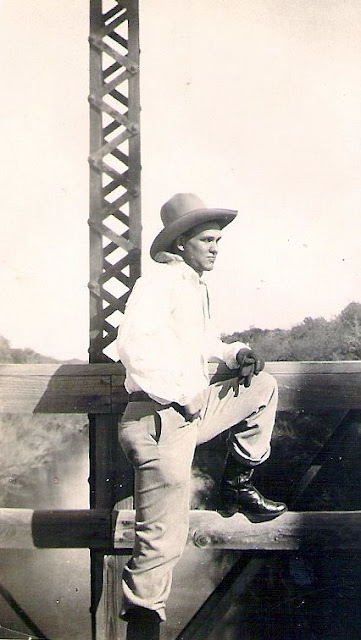 Taken on the Regency Bridge over the Colorado River on his younger brother's wedding day - my grandparents, ca 1930.

Never confuse the Hollywood version with the real deal; Texas cowboys work hard, daylight to dark, as the saying goes. No fancy-stitched shirts or intricately tooled leather saddles, a real cowboy is more likely to be wearing a shabby old Stetson with a permanently sweat-stained ring around the crown band and boots that have seen more stirrup than sidewalk.

He was born in 1907 near Hall Valley, Texas to poor hard-dirt farming parents; people whose ancestral bloodlines just a couple of generations prior traced back to the Old Country, places like Hainaut, France and Zweibrucken, Germany. Come to the Promise Land of America, but the milk and honey didn't exactly flow. Life on the sharecropper's farm was not easy, children died young and those that managed to hang on had days filled with grown man labor by the time they were eight or nine. Then, the Great Depression came upon them, and life became even tougher.

Uncle Vernon had a way with horses and livestock, and though his book-learning days were not stellar or long, he was more than compensated with his work ethic and common sense knowledge. Neighbors and town folk alike knew he could be counted on to help at a moment's call. Uncle Vernon was a gentle soul, one of the old breed of cowboy Texas is known for.

He liked the girls, could be quite the flirt, but for whatever reason, he didn't marry until he was 46 years old. Marie was an old maid spinster, and at age 41, she wasn't likely to get a better offer. Nevermind their ages, the two middle-aged sweethearts were inseparable and the absolute picture of devotion. In Vernon's eyes, Marie was the most gorgeous woman on earth, and you could physically see the love bouncing off the two of them.

Ranching was his profession, though Uncle Vernon never owned much more land than a few acres in his lifetime, if that. He and Aunt Marie settled near the little town of Placid and he worked for the Parker Pumphrey ranch. She ran the little store with a gas pump and was the town postmistress.


What's left of the old store: 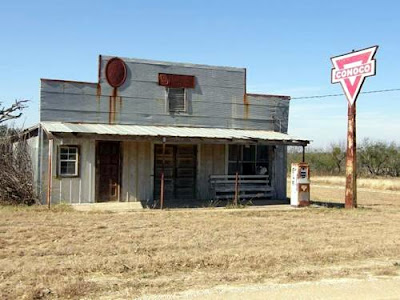 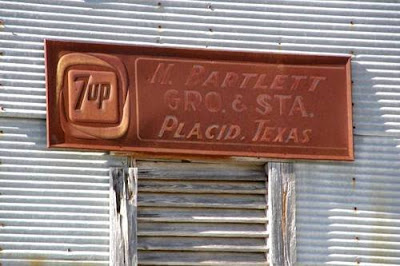 Aunt Marie died in 1982 of "the cancer" and the whole family thought Uncle Vernon would mourn himself to death, but life didn't change much for Vernon. Or if it did, he wasn't one to complain. He still got up before the sun debuted and ranched until his late 80's. A family member still has Uncle Vernon's favorite old working saddle hanging in her garage, a memento of a real cowboy. Sadly, his last year of life was spent in a nursing home, and thinking back, I wished there had been a better choice for the old gent. 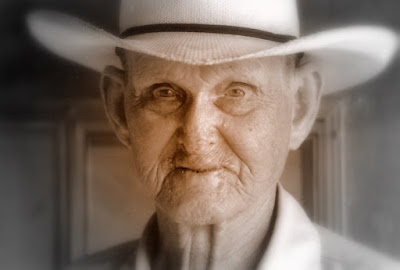 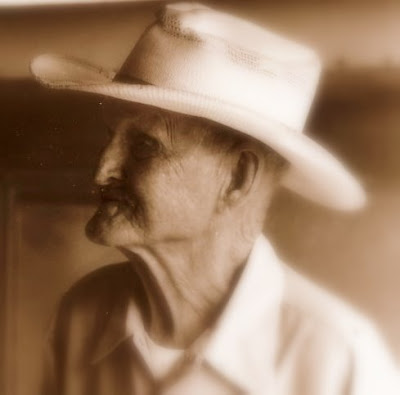 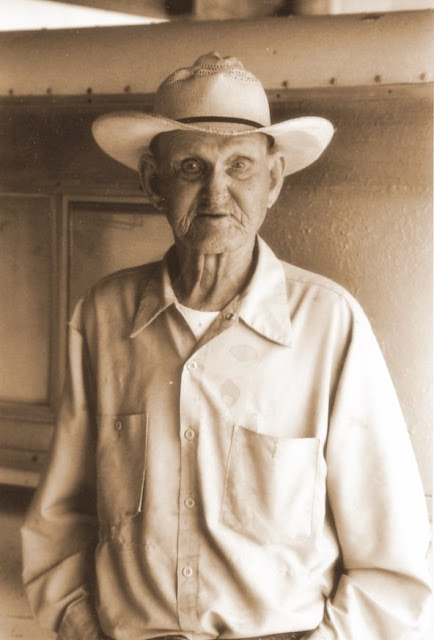 When he died on May 17th, 1996, Uncle Vernon's long-time friend and employer wrote to a nephew and his words from the heart sum up the man in a couple of touching paragraphs:

I felt sure the end was very near for Vernon and tried my best to prepare for this eventuality, but I suppose that's an impossible task to successfully carry out. While cleaning up at the ranch following the days subsequent to his funeral, I would catch myself about to say something to him. Or I would get up in the morning, look at where he used to park his white pick-up, and would start to mentally think: "Wonder where Vernon is; he's usually here by now." Well, I believe my actions to be as I should expect them to be as we spent a heck of a lot of time together for about 40 or so years, especially lately.

Vernon was very influential in my life. I have never met a more honest person. And his "jumping in and doing the task at hand" despite aches and pains was unexcelled.

Oh, I could go on and on about his top caliber personal and professional qualities, plus a lot of other most laudable attributes. But I need not do so as you well know what I would say. The mold was destroyed when he was made - there will certainly never be another like him - or even close. The rare people like him are what made our country great. I journeyed to his resting place last Friday to give him my final goodbye. I will always remember my friend on a frequent basis. I was so fortunate to have known this fine gentleman with the sterling character, other outstanding traits.